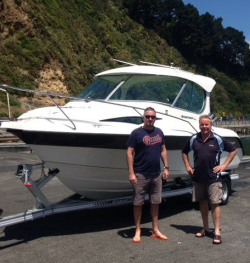 The delivery date was timed for the 30th September 2013. Coincidentally lining up nicely with the Rotorua Lakes trout season opening day of 1 October.

An easy tow from Hamilton to Rotorua, and launched into Lake Tarawera late in the afternoon. The next hour we put the new boat through its paces. What a package! Pleased we heeded Gerry’s advice and waited for the new model 200hp/4stroke Yamaha with unprecendented power to weight and unbelievable economy. This coupled with the new fly by wire remote controls allowing very easy operation. A couple of days trout fishing, including overnighting highlighted all the clever features incorporated in this new boat. Roll on summer!!

Several trips from Seaview Marina out to the south coast and Cook Strait, each time the conditions varied, as they do, from a light southerly to a typical strong norwester predominant at this time of year. The short sharp chop created with 25 to 30 knot winds against tide and the remnants of a southerly swell convinces us we have made a well informed decision to purchase this Buccaneer/Yamaha boat and motor package.

The story began in the late 1970’s, being keen boaties and subsequently involved for twenty odd years in the marine industry, heading up Adios Marine, we have had a long fruitful relationship, with Buccaneer Pleasure Craft and Gerry and Jenny Gerrand. In the early stages of Adios Marine our focus began on servicing all manner of outboard motors and during this time one of our customers had taken delivery of a new 4.7 Buccaneer Cabin. Buccaneer, like us at the time, were new entrants into the boating industry and it was this customer’s insistence on what a great boat he had chosen that prompted my first of many visits to Hamilton and the Buccaneer factory. We were officially dealers from 1980 when the 4.7 was redesigned to a 490 which was available in both a cabin and a sport runabout. The range grew and grew, now boasting 15 models, from 4 metres to 7.35 metres.

Whilst Adios Marine is no longer, Buccaneer have continued their drive for excellence in boat design and functionality, brought about by countless hours of all sorts of boating, coupled with lots of innovation and a firm belief, that just because a model is very good, it doesn’t mean that it cannot be improved upon.

I have experienced first hand, having used extensively over the last thirty years or more, such notable models as 605 Cuddy Sport, 2008 and 237 Billfishers, 605 and 635 Excess, 720 and latterly 735 Hardtops, and now the 635 Sportsman Hardtop. We have, as often can happen, when fishing offshore, been caught in some severe weather turns, and on these occasions have been comfortable in the knowledge that the boat will not be the weak link and on each return we have been in awe of the sea keeping capabilities of these boats.