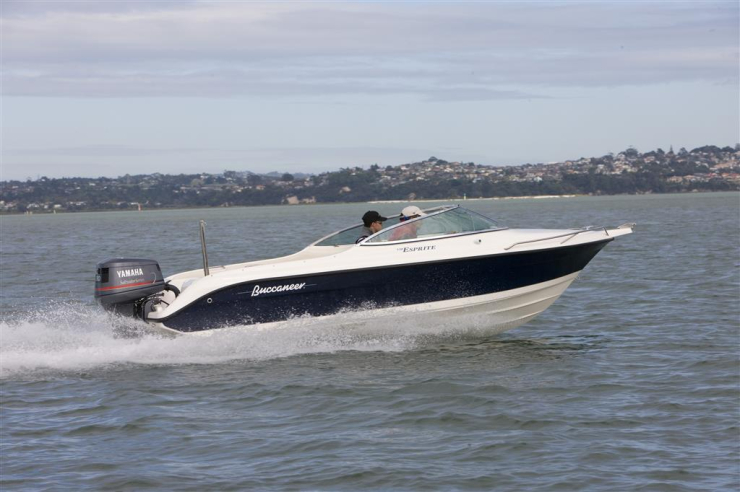 Choose from the Buccaneer Range

With their sleek good looks and agile sports handling, a Buccaneer runabout is the perfect option for boating fun on flat water. Hit the lake with the ski biscuit and the kids, or cruise the harbour and find a spot to anchor for a picnic.

Featuring back-to-back seats, so passengers can comfortably keep watch on the skier.

The anchor is easily accessed through the clever step-through (fold-back) windscreen.

Bow Riders are a great boat for families and groups, with additional seating in the bow, so everyone can enjoy the views on a scenic day trip or get a rod over the side. Also great for Trout Fishing as you have a lot of manoeuvrability up and down the boat to play the fish.

Featuring a small cabin, ideal for stowing all the gear you need for a fun day out on the water, plus a great possie for younger children to sit and look out of the windows.

The slightly wider body boats good storage space for the fishing gear, and with a higher profile it performs well in rougher seas.

Your skipper can stand at the helm to drive

While the Exess range comes highly specced from the factory and is also available in the Sportsman Range specific for fishing.

The Enforcers are a true Kiwi RIB, providing versatility to the avid boatie.

Thaw the bait and bring the ice bin, these boats are real fishing vessels. Whether you’re trawling for snapper or going on an overnight marlin mission, the Hardtop is ready to handle blue water adventure.

The full hardtop protects in choppy seas, while the magnificent curved windows with windscreen wipers ensure superb visibility from the helm.

Featuring a large and lockable cabin, with room to comfortably sleep two, and plenty of stow space for your gear.

Exess range comes highly specced from the factory and is also available in the Sportsman Range specific for fishing.

Designed to meet a gap in the market - a family friendly walk around fishing boat.

Specifications and options available on enquiry, or available on visit to the factory display.  It is a niche market boat, with your needs best discussed with us.

Designed in response to customer feedback, The Sportsman series of Half Cabin or  Hardtops are fisherman friendly for serious fishing.

With unadorned fibreglass in the gunwales, and a non-slip deck tread (rather than our traditional teak or carpet), the Sportsman is ready for fishing. But it doesn’t lack for luxury touches either

Built-in live bait tank in the transom, with a wash-down hose tucked down under the port gunwale and a large baitboard. Rod holders mounted on either side of the hardtop’s rear supports. She’s a large volume vessel with tonnes of kingie-fighting space in the cockpit. Given the hull’s sea-keeping pedigree, the Sportsman is a serious proposition for bluewater fishing.

A steep stem, 22.5 degree Deadrise and knife-like planing strakes all combine for a plush, smooth ride.